Billie Joe Armstrong never – ever – thought he would end up doing a musical on Broadway.  Broadway is a long way from punk rock mosh pits and singing to thousands of Green Day fans in stadiums around the world.

So when Tony Award winning director, Michael Mayer, suggested turning Green Day’s mega-hit album, American Idiot, into a staged musical, something strange and wonderful was bound to happen.  No one, however, could have guessed what, and so following Billie Joe Armstrong into this strange world of theater became the subject of our film:  Broadway Idiot.

But from the start, filming the story was never going to be easy.

Even getting cameras inside a Broadway rehearsal room is hard.   Actors unions have long limited access to them, and for good reason, the actor’s rehearsals are the time to “find their performance” or in other words, it’s a time for them to take some risks experimenting with different ways to sing or act a scene with the hopes of discovering the best way to do it.  All of this experimentation is a necessary part of the process of theater to develop performances that are stage worthy, but the problem is that experimenting like that means making mistakes and potentially looking or sounding bad.   Few artists, of any medium, are eager to put their “sketches” out for public display, so if you bring cameras into the rehearsal room – and record some of those “mistakes” or early drafts –  are you violating that sacred space?   Or worse, getting in the way of the process itself. 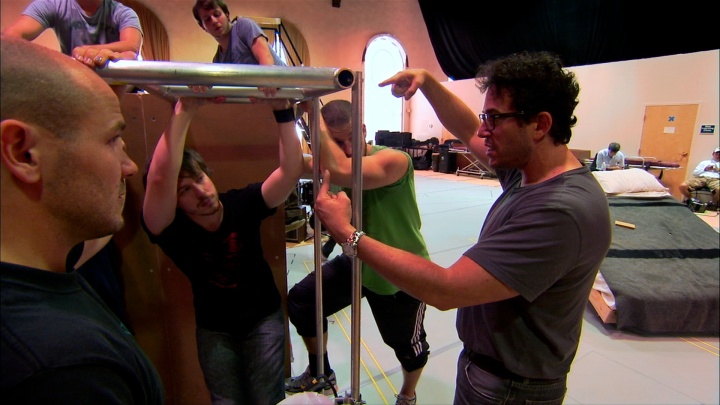 While I respect what happens in the rehearsal room, I know that for a documentary, you need to show how things develop – not just present the finished performance.  After all, that is what you see on the stage.   And while the actors are developing their performance, the creative team is shaping the story.  So to really see how a Broadway-bound show comes together, you need to be in that “room.”

Thankfully, the cast and creative team were very generous and allowed cameras into their process, giving Broadway Idiot a unique window into the art of theater.

That said when filming began, we still didn’t know where it would go.   I wondered how these two very different worlds of punk rock and traditional Broadway would work together.   Would there be creative clashes?  How would rock stars and stage stars deal with different ideas and creative conflicts?

What surprised me, and I think everyone involved with the process, is how smoothly the collaboration went.  Billie Joe Armstrong, Mike Dirnt, and Tre Cool of Green Day were very supportive of the original idea – but kept a respectful distance at first.  They were also touring during the early stage and could only check in from time to time, but their creative generosity impressed me even as it frustrated me as a filmmaker in search of a story.

Fortunately, if one thematic door closes, often another opens, and indeed another more interesting story began to take shape – one that was far more personal:  Billie Joe Armstrong’s own surprising reaction to the world of theater.     Early on Billie Joe wanted to step back and let the theater team do something different with “his baby,” the album of American Idiot.  What he never expected was how much he would fall in love with the world of theater and the community of actors in the show.

As the rehearsal process went on, Billie Joe started hanging out with the company and found a community of friends and fellow artists that reminded him of the early days of Green Day.

I never imagined at the start of this process, that one of the world’s biggest rock stars would let us tell such a personal story, but Billie Joe is ultimately an artist with a cavalier punk rock attitude.   He never put up walls with me and certainly not with anyone in the company.   He was shockingly open and helpful.   So too was his collaborator Michael Mayer – and much to my delight, I learned that Michael had a secret plan:  he wanted to convince Billie Joe to perform in the show itself.

Now Billie Joe had never acted and certainly never thought about performing in a Broadway musical.  Fortunately our cameras were once again in that rehearsal room and along for the ride.